Hello Dingleberries, don't get any ideas, this isn't a post with a nerdy guy who moves to a new school after getting his erect man parts bent by an elderly teacher. lolz 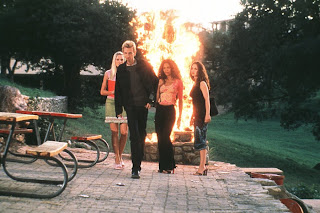 (Sorry Dingleberries, no pics of wang bending)
That being said I'm here to tell the tale of my New Guy, who you will discover is no new guy to me.  Should we begin at the beginning?  What do you want?!  Oh wait, this is not open for discussion and this is my lil ole blog!  Yays!
So Mr. The New Guy (his name for now) and I met when I was in high school, the day we met, he was only able to say "nice pants". (For the record, I did have nice pants).
Those were the Jnco days. I miss my Jncos at times, although I know I wouldn't be able to rawk them the way I did in high school.
We met and talked and had a blast, many a moon later we hooked up, (still in HS).
Don't worry I'm not going to bore you to death, this started off a lot better than it's working out.
So we dated throughout high school and then broke up when I was in 12th grade.
Many Many years later and a new boyfriend at my side my phone rang and it was him, strange world we live in.  Things went the way they went and we again got back together. This time what we thought would be forever.  Getting married shortly after getting together and making our beautiful, who you hear so much about, darling lil Pokey.  That's right Dingleberries... My New Guy is my ex guy, twice, and father of my child.  I'm realizing now that I was an utter complete jack arse for ever letting anything change my mind about him in the past. I've missed a lot of times with him and have every intention of not letting that happen again.
No matter what. It could always be worse and the grass is never greener on the other side. So Dingleberries, My New Guy will no longer be called New Guy. He is now "Mr. The Only One For Me".
Or should we just call him Mr. Monkey Butt?  Oh the decisions.
Posted by Hey Monkey Butt at 1:37 PM

Email ThisBlogThis!Share to TwitterShare to FacebookShare to Pinterest
Labels: it could be worse, love always, Mr. The Only One For Me, the grass is never greener 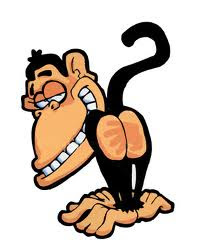